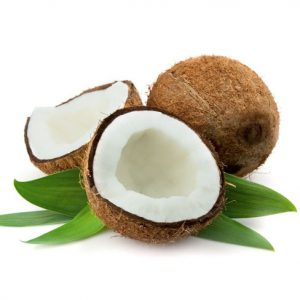 This festive tropical fruit is the fruit – or to be specific, drupe – of the palm tree, which originated in Malaysia and Polynesia. Coconut trees were first cultivated in two parts of the world: in the Pacific Ocean basin and in the Indian Ocean basin. The coconut earned its name from 16th century Portuguese sailors who thought the fruit resembled a smiling face. The fruit was named “Coco” – derived from the term meaning “grinning face”. Coconut milk – derived from coconut flesh – has a fat content of 17%, and is a core ingredient in a number of Eastern dishes.

Coconut is a functional food as it is highly nutritious, and rich in fibre, vitamins and minerals.

Coconut water – containing sugar, fibre, proteins, antioxidants, vitamins, and minerals – is known as a miracle liquid and provides an isotonic electrolyte balance. It was even used in emergency situations in World War II, to treat dehydration.

Coconut oil is also known for its many healing properties and is commonly used in alternative medicines. It is also a popular ingredient in cosmetics.